Jonathan has in the past condemned the charges against Dasuki, claiming
that there is no way the ex-NSA could have stolen about $2.2billion
funds for arms.

“We bought warships, we bought aircraft, we bought lots of weapons for
the army,” he said in a recent interview at the Oxford Union in the
United Kingdom.

“It will be desirable for Jonathan to testify for the ex-NSA. It will
throw greater light into grey areas. And it will serve the interest of
Justice. It will be fantastic for him to go to court to testify. Dasuki
is an agent of a disclosed and known principal.”

“With what Jonathan said in London, the only logical thing for him to do is to see it through.

“We want Jonathan to follow-through. If he backs out, it will be bad.”
But, in Raji’s view, a political solution will be better than trial
because of the “characters involved”.

He said: “But, frankly speaking, I pray for a political solution to the
problem because of the characters involved.xx

“Both the accused and the government should embrace a political solution to the problem.”

When asked if Dasuki was ready to proffer a political solution, he answered:

”I believe the President is very sincere. He wants to reorganise Nigeria and he deserves the support of all.

“With a political solution, Mr. President will be in good stead to
overcome unnecessary distractions in order to succeed.
“I pray that everybody will key into his vision and the economic
challenges facing the nation.”

Those point of advising a political solution is that it will not be
“tidy” for Dasuki to mention all those who got money from his office.
Among them, said a source, are a prominent traditional ruler in the
North, who reportedly got N500 million and a former Head of State.

A source, who spoke in confidence, said Dasuki’s defence team was
banking on Jonathan’s testimony.

The source said: “All is set for the defence of Dasuki, who is still
insisting on an open trial to let Nigerians know the beneficiaries of
the arms cash.

“One of those who may testify is ex-President Goodluck Jonathan whose
remarks in London appeared to be the first phase of the war chest of the
ex-NSA.

“You know the ex-NSA said he acted on Jonathan’s instructions in
disbursing some of the cash. And from the look of things, the
ex-President is now ready to accept responsibility for whatever Dasuki
did.

“We believe it has reached a level that Nigerians must know what really happened, how funds were disbursed and who got what.
“This is why a secret trial is not a viable option, with the way things are going.”

“So far, we have secured the consent of Jonathan to appear in court for Dasuki. This will make the trial worth it.”

Dasuki had on December 13, 2015 said he disbursed the funds on Jonathan’s instructions.

“I wish to state as follows: That I have been publicly indicted and any
statement may jeopardise my defence. Having been briefed the EFCC
investigators on why I was invited, I will answer the charges in court.
As such, I do not wish to make any further statement on the matter.

“That I am aware in November (I cannot remember the exact date), my
office requested the CBN to exchange N10billion from the account of the
Office of National Security Adviser domiciled in CBN. The money was
exchanged at $47m and some Euros which I cannot remember. The exact
amount was delivered at my residence.

“The money was for delegates that attended the nomination convention for
the PDP. Presidential nomination. The money was paid and sent to Hon.
(Waripamowei) Dudafa (SSAP Household) and ADC(C-I-C) for distribution on
the instruction of the President.

“Based on the statement of Director of Finance and Administration
(Salisu), Ibrahim Wambai, and Yazidu Ibrahim, all the cash (both foreign
and local) are usually given to them for official use.
“I also noted the statement of Sagir Bafarawa whose company is Dalhatu
Investment in which he stated that he received the sum of N4,633,000,000
from the account of the Office of the NSA. I authorised the pay ment .
The money was for vehicles, motorcycles for youth empowerment and women
sent to Saudi Arabia. I got the proposal from the President. I do not
have the proposal; it should be at the office in the Villa.” 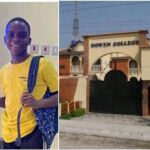 stand up for the president elect, Donald Trump