The Ebonyi Government has made it open that  it is anticipating bumper harvest of 350 metric tons of rice in the 2016 farming season.

Gov.
David Umahi expressed the hope at the inaugural National Agricultural
Summit organised the Federal University, Ndufu-Alike, Ikwo Local
Government Area of the State yesterday  Thursday.The theme of the summit is ‘The New Face of Agricultural Training In a Declining Oil-Based Economy.’ He   said…

“We
were determined to revolutionalise rice production in the state due to
our comparative advantage over other states and make it reclaim its
position of highest rice producer in West Africa.We
currently have the biggest rice mill cluster in the sub region with
over 20 metric-tons capacity of rice processing facilities.
The
rice we cultivate internally is insufficient for processing in our
mills and we seek rice paddy from Akwa Ibom, Cross River, among others,
to meet internal and external needs”, he said.

We
also procured 8-metric tons per hour capacity parboiling equipment, to
permanently stop parboiling of rice our farmers and processors
through crude methods.’’

Umahi
remarked that the government would pursue aggressive rice production in
the dry season cultivating over 54, 000 hectares from Jan. 2017.

We
have invited investors to install irrigation facilities at the farms
with channelisation mechanisms from the Ebonyi River which spread across
the state.

Our
one man, one hectare agricultural policy would ensure that our rice
production feat is sustained with every citizen cultivating at least one
hectare of farmland.”

Minister Agriculture and Rural Development, Chief
Audu Ogbeh
represented Mr Sunday Edibo, Director of Agriculture, Lands and
Climate Change Management Services, called for more
funding of the agricultural sector to achieve the nation’s objectives and he noted that the country falls short
of the Maputo declaration for agricultural funding.

“It
should be noted that agriculture can solve the nation’s unemployment
problems engaging individuals in its production value-chain of input
supply, cultivation, processing, packaging, distribution, marketing,
among others”, he said.

“The
summit would also discuss training for the next generation of farmers
and agriculturists which make us canvass for the reduction of
agricultural study’s duration in universities, from five to four years.” 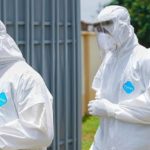 Nigerian Doctors to go on strike over unpaid COVID-19 allowances