Carlos Alberto is dead
Brazil legend Carlos Alberto, the captain of the 1970 World
Cup-winning side, has died aged 72.

He scored one of the greatest goals in World Cup history in
the 1970 final against Italy, rounding off a sublime team
move with a powerful low finish.
Right-back Alberto was capped 53 times Brazil and won
domestic titles with Flamengo and Santos, for whom he
made more than 400 appearances.
He died in Rio de Janeiro following a heart attack.
Festus Iyamu 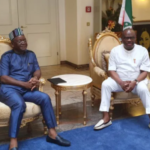