North Korean defector has claimed that Kim Jong Un’s cannot stand up or walk himself amid rumours the controversial dictator is dead or seriously ill.

Thae Yong-ho told CNN that Kim’s ‘abnormal’ absence from a ruling party showpiece on April 15 signalled that the dictator must be physically impaired.

Thae, a former North Korean diplomat who was elected to the South’s parliament earlier this month, said;

‘I’m not quite sure whether he really had some surgery or whatever, but one thing is clear… he cannot stand up himself or walk properly.’

Four days ago, TMZ reported that Kim had died or is on his death bed with no hope for recuperation before Seoul and Washington played down rumours that Kim is gravely ill or dead.

Reacting to the reports, Thae warned that only a small handful of people including Kim’s wife Ri Jol-su and his sister Kim Yo-jong would know the full story.

Kim was last seen in public on April 11, when he presided over a meeting of the ruling Workers’ Party in Pyongyang.

On April 15, he missed an event that honored his Kim’s grandfather, Kim Il Sung on April 15, and he has not been seen in public since.

Several reports said that he underwent a life-saving heart surgery, which either wasn’t done rapidly enough, or it was botched completely the surgeon, after he clutched his chest in early April and fell down while visiting the countryside.

over 5,000 school children gathered for annual celebration of the global World Milk Day in Lagos 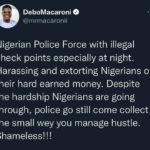