The 62-year-old came in to replace Ernesto Valverde at the Camp Nou in January 2020 and was only in charge for seven months, before he was sacked following the club’s infamous 8-2 defeat to Bayern Munich in the Champions League.

In an interview for El Pais, Setien sat down with former Real Madrid and Spain coach Vicente del Bosque to discuss his time at the Camp Nou and what it’s like to manage captain Lionel Messi.

On his relationship with Lionel Messi, Setien said the six Ballon d’Or awards winner is difficult to manage because he’s the best player in history and there was nothing he could do to change him.

“There are players that aren’t easy to manage, and Leo is one of them,” Setien explained.

“You also have to remember that he’s the best player in history and who am I to try and change him as a player? I can’t do anything if those at the club have accepted him for how he is and haven’t changed him for years.

“It’s not just the player that you have to manage, there another side and that is much more complicated. It’s something which is built into many sportspeople like we saw in the Michael Jordan documentary [The Last Dance]. You see things that you don’t expect to see.

“He’s very reserved but he makes you see the things that he wants. He doesn’t talk much, but he looks.” 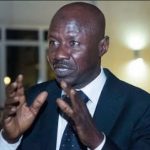 Buhari has ordered an investigation into the circumstances surrounding the death of a corp member Ifedolapo Oladepo who died in Kano camp.. See the tweet.