News have it that four judicial officers have been recommended the National Judicial Council (NJC) for elevation to the supreme court.

The apex court currently has 12 justices, as against the constitutionally required number of 21 at maximum

Two out of the four nominees were part of the panel that dismissed the Peoples Democratic Party (PDP) and Atiku Abubakar’s petition which challenged the victory of President Muhammadu Buhari at the 2019 poll.

Garba was the judge who led the five-man presidential election petition tribunal which heard the petition filed the Peoples Democratic Party (PDP) and Atiku Abubakar. Aboki was also on the panel.

In October 2019, the NJC had recommended Adamu Jauro, Emmanuel A. Agim, Samuel C. Oseji, and Helen M. Ogunwumiju (all appeal court justices) for appointment as justices of the Supreme Court, but President Buhari is yet to forward the names of the justices to the senate for confirmation as required section 231(2) of the constitution of the federal republic of Nigeria 1999 as amended. 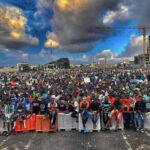 This is not goodnews: Another senior military officer killed again