The initiative replaces the Kick Against Indiscipline (KAI) with the Lagos Environmental Sanitation Corps (LAGESC).
Speaking at the soft launch of the CLI held at Agege Stadium, Governor Ambode who was represented the State’s Deputy Governor, Mrs Idiat Adebule, said since the inception of his administration, sanitation had been given priority as it was important for maintaining a secure and more prosperous State.
According to him,

‘to roll back sanitation shortcomings and accelerate seamless cleaning of our environment, the Lagos mega-city was in dire need of an enduring solution that would match the needed technology with the massive investment required for its attainment. “It is this void that the CLI has come to fill creating an environment for the private sector to harness international best practice in the vital area of solid waste management and consequently free public funds for other beneficial uses’. 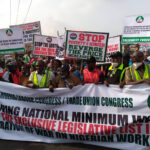