The senate ad-hoc committee on the mounting humanitarian crisis in the North East, has sent a letter to suspended Secretary General of the Federation SGF, Babachir Lawal, inviting him to appear before it today April 27th, for questioning over allegations of fraud leveled against him.The senate adhoc committee last December accused Babachir of using his office as the Chairman of the Presidential Initiative for the North East PINE, to award contracts to some committees in which he had links to. Part of the allegations is that he awarded a contract of N270 million to a company, Rhodavision, to cut grass in some of the IDP camps.Babachir had dismissed the allegations and accused the committee of not inviting him to their public hearing. The senate had invited him on March 15th but Babachir had replied saying he had gone to court to challenge the authority of the committee to invite him for questioning.With this invitation to appear before the committee today April 27th, the senate hopes that Babachir would clear his name on all the allegations that have been leveled against him. Last week, President Buhari ordered the suspension of Babachr and also constituted a three-man panel headed Vice President Yemi Osinbajo, to investigate the allegations against Babachir.
(L.Ikeji)

TB Joshua has reacted to his failed prophecy 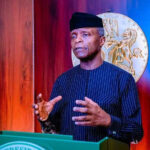 There are more opportunities for prosperity if Nigeria remains an indivisible entity – Yemi Osinbajo,vice president of Nigeria

Protesters gather in Minna to say No to Power Failure