There was Panic every where yesterday wednesday 15th feb., 2017 as Girls had to be evicted from their hostels yesterday. Glass windows of their hostels were shattered.

Dining Hall,  Photocopy Stand, Micro Finance Bank Vandalized Students.
According to an eyewitness witness reporter, Racheal Musa.
“The guy collapsed when they were playing ball in the school field and was brought to the clinic but they did not attend to him.” She added that…
“It was 9pm that his friend came  around and took him to another clinic on their way the guy die”
Credit: Musa Racheal
Fb: Musa Racheal 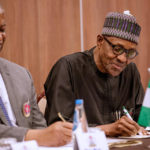