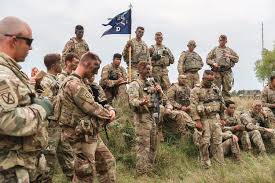 Report has it that United States of America ammunition is set to arrive in Ukraine this week – the final elements of a $60 million security assistance package, Pentagon spokesman John Kirhas said.

The security package is designed to bolster Ukraine’s self-defense capability, especially as Russian forces continue to build up near the country’s borders.

The US says it has watched the Russian troop build up nearing hundreds of thousands with growing concern, and US officials have been in touch with their NATO and European counterparts to coordinate a response should Russian President Vladimir Putin decide to invade Ukraine.

In 2021 alone, the US has delivered approximately $450 million in security assistance to Ukraine, Kirsaid, including the aid arriving this week.

Since 2014, when Russia invaded and occupied the Crimean peninsula, the US has provided more than $2.5 billion in aid to Ukraine.

On Tuesday, December 7, Biden warned Putin, in a virtual meeting that turned tense at times, about invading Ukraine, revealing that his administration is preparing a series of harsh economic sanctions if Russian forces do attack.

In November, about 150 members of the Florida National Guard’s Task Force Gator deployed to Ukraine as part of the Joint Multinational Training Group-Ukraine, replacing the Washington National Guard.

In addition to Task Force Gator, Special Operations Command Europe has a “large role” in training and advising Ukrainian special forces through exercises, communication and coordination “at every echelon,” the Pentagon said in a statement Tuesday.

VOICE OF THE MORNING: WHEN DARKNESS THREATENS