He has also revealed that the girls were used as porters and domestic workers but were not sexually abused. Though some Nigerians have been reacting to that saying if they were not sexually abused why will some of them return with babies. One of those 21 Chibok girls have said that the Nigeria air force shouldn’t bomb sambisa because some Chibok girls are still there. 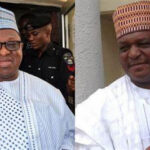