Senior Special Assistant to President Buhari on Diaspora Affairs, Mrs Abike Dabiri-Erewa says that no fewer than 128 Nigerians were among the over 576 West African migrants to Europe that drowned in the Mediterranean sea recently. She disclosed thison Tuesday, at the public presentation of two books “From Libya with Tears’’ and “Practical News and Feature Writing’’ in Lagos.
Mrs Dabiri, who was represented her Special Assistant on Media, Mr Abdul-Rahman Balogun, said most of the victims were heading to Italy enroute the Libyan coast, when the tragedy occurred. She described the incident as unfortunate, saying the story was one too many and that it highlighted the desperation some Nigerians to travel to Europe at all costs, despite the high risks.

“Just some days ago, 128 Nigerians died on the Mediterranean sea out of 576. Most of them were from West African countries and they were on their way to Europe.

“Now, this is an unfortunate incident and I think it is better to remain in Nigeria and keep struggling, instead of making desperate journeys that could take their lives,” she said.

Dabiri-Erewa said some Nigerians had been trapped in Libya and were subjected to various inhuman treatments and that only the intervention of the Federal Government had ensured the return of many.
Source: L.Ikeji 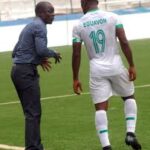 “You must get out” – Obasanjo tells Buhari