Reports have it that Bandits have stormed a boys boarding secondary school in Kankara town, the headquarters of Kankara Local Government Area and kidnapped some students on Friday night.

However, a very credible source in the school said as of Saturday morning, 600 out of the 800 students were not accounted for the school authorities.

The source however said it could not be ascertained how many of the students were actually kidnapped, saying some of them could have fled into the bush or nearhomes when the kidnappers arrived the school around 9.30 p.m.

According to the source, the school has over 800 students, with the exception of JS3 and SS3 students who are now out of school.

He said so far, 600 students are yet to return to the school several hours after the attack. “We are still hoping that some of them might return. We believe some of them fled the attack and ran into the bush,” he said.

A parent of one of the students, Murtala Musa, in an interview with Tribune Online disclosed that his son, Hamza Murtala, was one of the kidnapped student.

Another man, Yazedu Abdulnasir, of Mai kawo village also said two of his brothers, Zakaria and Jaafar, were among the kidnapped students.

According to Abdulnasir, he received the news of the attack at 11pm when one of his brothers called to tell him that Government Science School Kankara was being attacked bandits.

To of my brothers, Zakaria and Jaafar, were among those students kidnapped. This morning we were in school and the school told us that some of the students are believed to be taken away the kidnappers.

When contacted, the police spokesman, SP Isah Gambo, confirmed the attack. He said the police and other security operatives are on top of the situation.

Meanwhile, the state government is yet to make an official statement at the time of filing the report. But a source in Government House, Katsina, said the governor has summoned an emergency meeting of the State Security council. 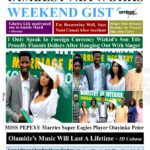 Weekend Gist: Enjoy major headlines of events within the week

Buhari has ordered an investigation into the circumstances surrounding the death of a corp member Ifedolapo Oladepo who died in Kano camp.. See the tweet.