Yesterday, there were reports that the Lagos state commissioner of Police, Fatai Owoseni, placed a ban on the February 6th protest against the federal government in Lagos. Speaking exclusively to LIB this morning, the commissioner while clarifying his position on the issue said:

We have met with the organizers of the 2face rally. The other group that also want to do pro-government rally, we have brought their attention to the provisions of the constitution and its on the bases of that that we are advising them to shelve whatever rallies as a respect to the constitution. It is not power or the take of the police commissioner to say he is banning a rally. I am not the law. Everything the police do is within the confines of the law. We only brought their attention to those provisions of the law and advised them to abide with the constitution.

After seeing all the controversies surrounding what they want to do, we also have a duty to protect the rights and freedom of other persons. Since its going to affect public safety and order, it is a mandate that where every other persons want to go to work, so we have advised them on the basis of what the constitution says and that is our position”

Asked if the force would put up any resistance should the protest go ahead on Monday, Owoseni said

“We believe that they are very responsible people and they will abide the provision of that constitution that makes their rights not to be absolute to respect the rights of other citizens. We are assuring the members of the public that we would do the needful to ensure everybody goes about his or her lawful business without any injuries”.

Read why ASUU went on strike 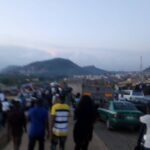