Just yesterday Tuesday, a total of 335 foreign nationals were granted citizenship the Nigerian Government after statutory clearance and due diligence the relevant security agencies and Mrs Iara Oshiomhole, Wife of former Governor of Edo, Adams Oshiomole‎, who hails from Cape Verde was one of the recipients.

Abdulrahman Dambazau the Minister of interior who presented the certificates of citizenship to the foreigners charged them to be good ambassadors of Nigeria.
Dambazau in his remarks said that 335 applicants were approved the Federal Executive Council (FEC) in January, out of the over 500 foreigners that applied.
He explained that 245 of the foreigners approved were granted Citizenship by‎ Naturalisation while 90 were Registration, mainly foreign women married to Nigerians.

The last time a similar ceremony was conducted was in December, 2013. It’s the duty of the Ministry of Interior and the Nigeria Immigration Service (NIS) to process applications for Naturalisation from foreign nationals who have stayed/lived in Nigeria for a minimum of 15 years and those Registration who are mainly married to Nigerians.
Source: L.Ikeji 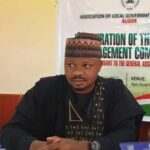 ‘We must rescue Nigeria from political vampires’