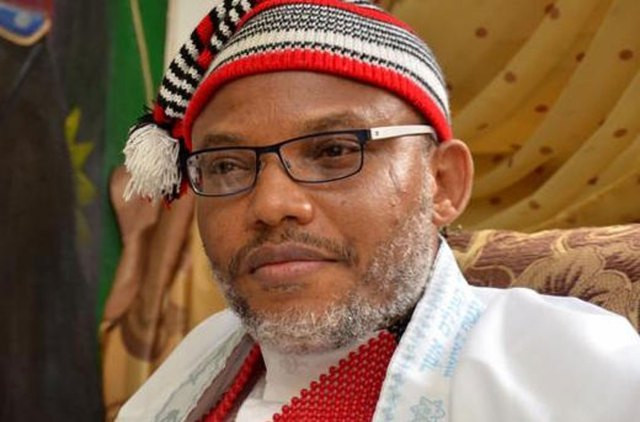 Leader of the Indigenous People of Biafra, Nnamdi Kanu has appealed to the Supreme Court to set aside the ruling of the Court of Appeal staying the execution of the court’s judgment discharging him.

Kanu’s lawyers in a statement they released, said the ruling has no foundation in law or facts placed before the court.

“We have appealed to the Supreme Court to set aside the ruling of the Court of Appeal staying the execution of the court’s judgment discharging and placing further bar to any further detention and prosecution of Mazi Nnamdi Kanu on any charge/indictment before any court in Nigeria.

“After a thorough review of the said ruling our defence team eminently led foremost leading Senior Advocate of Nigeria – Chief Mike Ozekhome (SAN), an informed decision was taken the erudite Senior Advocate and the entire team that the said ruling, which has no foundation in law or facts, placed before the court, should be immediately appealed against, for it to be set aside the Apex Court.

“Our well-informed position was given a final nod our indefatigable client, Onyendu Mazi Nnamdi Kanu, during my last visit to him.

“We are, therefore, this medium, informing the general public, and Umuchineke in particular, that we have filed an appeal against the said Ruling of the Court of Appeal delivered October 28, 2022, and will proactively follow up on the administrative process to ensure that both appeals are given [an] accelerated hearing in line with the extant fast track rules of the Supreme Court.

“We shall keep everyone abreast of the development in the appeals as we progress. We respectfully urge you all to still remain peaceful and law-abiding, as always, and rest assured that the ruling of the Court of Appeal now appealed against will be reviewed on merit learned Justices of the Supreme Court.

“Let us reiterate, for the avoidance of any doubt, that the said ruling did not interfere in any way with the status of the judgment of the Court of Appeal discharging Onyendu.

“The judgment of the Court of Appeal discharging Onyendu and striking out the seven-count charge still subsists; it has not been set aside. Thank you all, and remain blessed, Umuchineke.”

Nigeria remains committed to the fight against ‘violent extremism’ – Buhari