NEMA’s Deputy Director of Search and Rescue, Dr Onimode Bandele has called on Nigerians to join hands with the government to develop the country after a total of 41 Nigerians, made up of 33 males and 8 females, deported from the United Kingdom arrived Murtala Muhammed International Airport Lagos on Wednesday and were received the National Emergency Management Agency on behalf of the Federal Government.

“Nigeria of today offer adequate opportunity for all to excel and realize potentials.”

Bandele, who was represented the Director General Muhammad Sani Sidi stated this yesterday, while receiving the Nigerians deported from the United Kingdom, on behalf of the Federal Government.

The deportees were transported in a chartered flight the British authorities which arrived about 7:40am at the cargo wing of the airport where they were screened a team of Nigerian Immigration Service officials and security operatives before being released to the National Emergency Management Agency.

Bandele said they were deported mainly for immigration related offences, therefore the Nigerian Immigration Service was already conducting further investigation on their documents.

“There was no prisoner on board the aircraft that brought the deportees. These are Nigerians that have committed some immigrated related offences. Our roles here is to receive the deportees on behalf of the Federal Government, counsel and assist them. Nigeria of today offer adequate opportunity for all to excel and realize potentials. So, you don’t have to travel abroad if you don’t have proper documents to so. We should join hands with the government to develop our country.”

Most of the deportees were observed to be calm as they were flown in with handful of personal baggages. Though some of them were stranded and had to be assisted home. Few of them were received their relatives after the immigration and security screening.

“we are going to win back the White House” – Trump 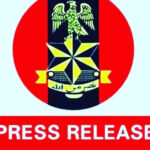