tice paganism. He was  alleging that some evangelists are trying to convert the people to Christianity. Read what Nafiu Umar said

“This is a challenge to all Muslim Community in the the North and especially from North central. This village is called Birnin Amina in Rijau Local Government of Niger state. The community there they don’t practice any religion but paganism. Now our people of the other religions are taking advantage of their situation clothing them as you can see on the picture below . Their main aim is convert them into Christianity. This is a challenge to both of us. Pls let’s do something in time.” 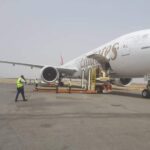 Nigeria has just received its first wave of #COVID19 vaccines

, Senator Chukwuma Utazi has assured the EFCC of the senate’s support to ensure release of funds the federal ministry of finance towards the completion of the Commission’s head office

Trump “may” not be the next US president any longer