Reports reaching us that the airlines flying to and from
Australia’s Melbourne Airport today Friday were told they could receive
half of their normal regular jet fuel after  series of supply disruptions, three
aviation personal told us.
Because of the shortage, some international flights would stop in other
Australian cities to pick up fuel en route to their destinations.

This is costly for airlines and can lead to missed connections passengers, the sources told media.

Melbourne Airport said in a statement that temporary fuel rationing measures had been put in place.

A spokesman for Exxon Mobil, the operator of the airport’s joint user
fuel facility, said it was working with customers and industry
partners to manage the fuel supply issue.

“The supply issue has arisen following disruptions in recent weeks to
jet fuel deliveries from multiple fuel terminals across Melbourne,
which are in the process of being resolved,” the spokesman said.

A Qantas spokesperson reported that ” services from Melbourne to Hong Kong and
Singapore on Friday that was normally non-stop would need to stop in
Sydney to refuel.

However, domestic services would not be affected since they could carry extra fuel from the originating airport.”

Air New Zealand could not be
reached immediately for comment.
Board of Airline Representatives of Australia Executive Director,
Barry Abrams said that airlines were doing all they can to minimize the
disruption to passengers.

The main responsibility lies with the jet fuel suppliers. 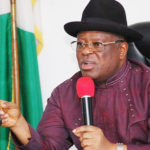 Breaking News: Justice Sylvester if Supreme Court has been charge to court