Just after some few weeks back that some chibok girls were released and rescued as some media would say, another Chibok girl has been rescued the Nigerian troops.
This good news was revealed Colonel Sank Kukasheka who is the spokesperson to the Nigerian Army.
A close ally to military official said this to our correspondent…
“She has been confirmed to be one of the missing girls. Her name is maryam, she was seen with a baby. Both are currently receiving attention and will be escourted back to Maiduguri.” According to a reliable source, it was discloses that rhe bais 10 months old.
Though it been on the news after some girls were released last few weeks that the federal government is on the negotaion table to rescue 83 more chibok missing girls. 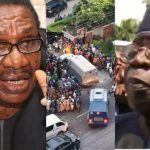 There is no merit in bullion van petitions against Tinubu, that is why the EFCC is not acting on them – Sagay