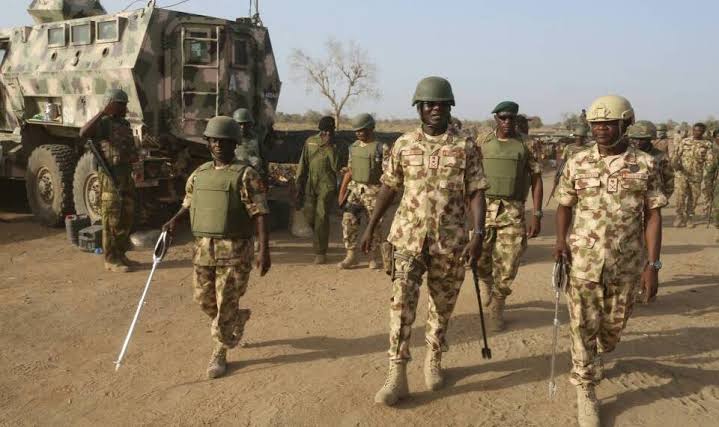 Nigerian Army has denied a media report claiming the defence headquarters has issued a warning to soldiers against overthrowing the Buhari-led administration.

Onyema said the said publication, which was riddled with outrageous lies and fabrications claimed that the “Defence Headquarters has denounced a call for the military to take over the reins of power”. The online outlet went further to attribute its falsehood to “Army Spokesman, Brig-Gen Onyema Nwachukwu”.

The Army spokesperson said the only reason why ”this grossly unprofessional and blatantly irresponsible report is receiving any attention” is because it was attributed to him.

”For the sake of clarity and to keep the records straight, we wish to state that at no time did the Director, Army Public Relations, Brig Gen Onyema Nwachukwu issue any statement on the subject matter. It is therefore a figment of their imagination, which did not in anyway emanate from Brig Gen Nwachukwu.

In any case, officers and soldiers of the Nigerian Army do not need to be “warned against overthrowing Buhari’s government” as their loyalty to the Constitution of the Federal Republic of Nigeria and to the Commander-In-Chief of the Armed Forces has never been in doubt. The Nigerian Army is a reputable national and patriotic institution that has fully subordinated herself to civil authority, having stood unwaveringly in defence of the nation’s democracy.”the statement from Nwachukwu read

I am stronger in fighting corruption than President – former Abia state governor, Orji.