A statement signed Brig. Gen. Sani Kukasheka said that the rescued herdsmen have been re-united with their families.

Kukasheka said that the troops had killed two insurgents and recovered ammunition after a gun duel with the insurgents.

“The troops in conjunction with local vigilante familiar with the
area trailed the terrorists up to Mangari village about 20 kilometres
away from Kamuya.

“The troops exchanged fire with the insurgents, neutralized two of
them and rescued the abducted persons. The troops also recovered two
AK-47 rifles. The rescued persons have been reunited with their family,”
Kukasheka said.
source: Daily trust 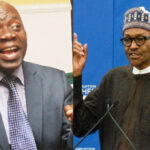 New service Chiefs: Appointments of service chiefs is inchoate because President Buhari has not forwarded their names to the national assembly – Falana lament