The Nigerian Army has rescued all the staff of Nigerian National Petroleum Corporation (NNPC) kidnapped Boko Haram terrorists during an ambush in Borno yesterday.

Recall that the insurgents ambushed the military escort and oil workers, who were traveling in a convoy of about 10 vehicles at a village along Gubio and Magumeri local government area. The team were returning from an oil exploration in the Lake Chad Basin.
The Director, Army Public Relations, Brig.-Gen. Sani Usman, who disclosed this in a statement on Wednesday, said that the bodies of an officer, eight soldiers and a civilian, who died in the attack had been recovered and evacuated to 7 Division Medical Services and Hospital.
“Suspected Boko Haram terrorists ambushed the escort and team of Nigerian National Petroleum Company (NNPC) staff returning from oil exploration at Barno Yasu, Magumeri Local Government Area of Borno on Tuesday.
“On receipt of the information, the Brigade mobilised and sent reinforcement, search and rescue party that included the Armed Forces Special Forces and guides that worked and pursued the terrorists throughout the night.
“So far, they have rescued all the NNPC staff and recovered the corpses of the Officer, 8 soldiers and a civilian who have been evacuated to 7 Division Medical Services and Hospital.
“The team recovered 4 vehicles one of which include a gun truck mounted with an Anti-Aircraft Gun,two white Hilux taken away from NNPC staff and one blue Hilux belonging to CJTF.
“The team also recovered large quantities of arms and ammunition, several spare tyres, many jerry cans containing Petroleum, Oil and Lubricant, assorted drugs, Improvised Explosive Device (IED) making materials, reflective jackets and a Motorola handheld radio, among others. The team also neutralised many of the terrorists,” the army spokesman said.
Source: L.Ikeji
Tagged: News 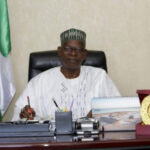