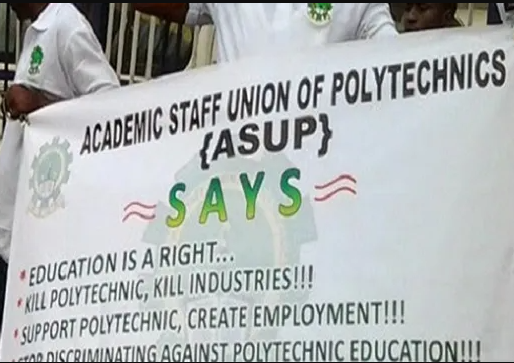 The Academic Staff Union of Polytechnics (ASUP) has given the Federal Government a fourteen-day ultimatum threatening to embark on an indefinite strike if its demands are not met.

This comes following an emergency meeting of the National Executive Council of ASUP.

The union resolved that its members would begin an indefinite strike if the federal government fails to meet its seven-point demand within the next two weeks.

The union listed the immediate release of N15 billion revitalization funds for polytechnics approved president Muhammad Buhari eleven months ago, as one of their major demands.

Others include the immediate release of arrears of the new minimum wage owed to polytechnic staff.

The union also urged the federal government to address the issue of non-release of the scheme of service for polytechnics, approved in 2017.

They are also asking for the immediate compliance and Implementation of the approved retirement age and new salary structure for polytechnic staff.

The union urged members of the public to prevail on the federal government to do the needful meeting the demands within the time frame given the union. It added that this would go a long way in averting the ongoing plans to shut down academic activities in Polytechnics across the country.