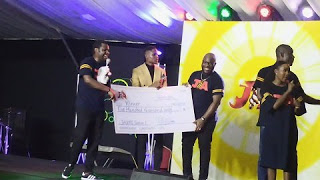 Among 12 other contestants at the grand finale of the contest organised Resident Pastor of House on the Rock, Minna Pastor Petrock Sadiq, Aminu won against all odds..

He narrowingly escaped the auditions stage with one point but with his determined Spirit he still emerged winner..

He wowed the crowd his outstanding performance, Aminu was given the some of N500,000 as cash price.

Aminu accredited  his win to his mother, his mentor Pastor Vincy and some of his friends who encouraged and inspired  him.

According  to Pastor Petrock  Sadiq , the organizer , this is just one of many editions, He added that two editions of the JIA gospel talent show would hold every year and the portal would be open in May for entries  into the next edition set to hold in October.

Photos Speak: Praise And Worship Unconditionally (PAWU) 2018 was a success.