Yesterday, Governor Darius Ishaku of Taraba State raised alarm over influx of Boko Haram members into the state disturbing the peace if the state.

Reports have it that, the influx has made the state relatively unsafe, following recent attacks which gave rise to internally-displaced persons. The governor raised the alarm while hosting  senators in his office in Jalingo, he pointed out that recent arrests and interrogations security agents indicated a high rate of influx to the state. The senators were in the state on fact-finding mission to IDPs camps in the state. Governor Ishaku said it was the responsibility of the Federal Government to take proactive measures to forestall any breakdown of law and order, urging the senators to evolve ways of tackling issues of insurgency in the country, particularly in the North-East, which had been ravaged Boko Haram. Earlier in his speech, leader of the delegation, Senator Kabiru Gaya (Kano South), told the governor that the team was in the state to authenticate the number of IDPs in the state and look into ways of supporting them. It would be recalled that the senator representing Taraba South, Senator Emmanuel Bwacha, had earlier this year raised at the Senate, alleging high influx of unknown persons into Taraba State. 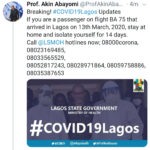 Breaking: Isolate yourself for 14 days if you were a passenger on flight BA 75 that arrived Lagos on March 13 – Lagos Health Commissioner, Prof Abayomi