NAFDAC has said  that there’s a large quantities of fake and expired drugs,
supplements, oil and beverages in circulation in Abia State.

Officials of the agency during a mop up exercise at
the Ariaria International Market in Aba reportedly discovered that the
dates of some drugs which had expired six months ago have been tampered
with and re-written using a handmade machine.

The statement said although some of the perpetrators are on the run, their shops have been sealed. 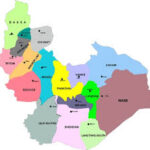