Federal Government has declared that Nigeria is now free of the deadly “Type C” Cero Spinal Meningitis (CSM) which has claimed about 1,166 lives since it broke out in Nigeria in 2016.

In a statement released on Saturday, the Chief Executive Officer of the Nigeria Centre for Disease Control (NCDC), Dr. Chikwe Ihekweazu, said with the decline in Meningitis cases, the 2016/2017 Meningitis outbreak is over and the Emergency Operations Centre (EOC) responding to the epidemic has been stepped down.

Ihekweazu revealed in the statement that the outbreak has been declining constantly for eight weeks and fewer new cases have been recorded in the affected states. He stated that no Local Government Area has reached the outbreak alert threshold in the last four weeks.

He credited the NCDC, the National Primary Healthcare Development Agency (NPHCDA) and partner organisations for the efforts made in reducing the impact of the outbreak on affected communities. He said the NCDC established a National EOC, which coordinated the national outbreak response, including the deployment of Rapid Response Teams (RRT) to the most affected States to strengthen surveillance, case management, laboratory capacity and risk communication.

“The planning process to prevent future outbreaks and ensuring better preparedness for the next epidemic season has begun. Laboratory capacity has been improved with the recent operationalisation of the new National Reference Laboratory in Gaduwa, Abuja with support from the Federal Ministry of Health, the US CDC and the World Health Organisation,” Ihekweazu said

“NCDC is also coordinating a network of laboratories across the country to improve case confirmation capacity. National guidelines towards responding to future outbreaks are being developed together with ongoing continuous awareness campaigns, keeping the general public informed. Workshops to improve preparedness are also being organised.”

He added that the reactive vaccination campaigns led the NPHCDA were successfully conducted in the affected states, including Zamfara, Sokoto, Yobe and Katsina States. The state governments were fully engaged in conducting these campaigns to ensure that the vaccines reached the most at-risk population.

The NCDC boss said: “While NCDC has stepped down the Emergency response, the work never stops – we will continue to work 24/7 to ensure the protection of all Nigerians against infectious disease threats. We recognise our leadership, the Honorable Ministers of Health and the leadership of the National Primary Health Care Development Agency for the joint support during the outbreak.

“We are very grateful to the Government of Zamfara and Sokoto States for their excellent leadership during the outbreak. We also thank our partners including the World Health Organisation, Africa Centre for Disease Control, as well as the US Centers for Disease Control and its implementing partners – African Field Epidemiology Network and the University of Maryland Baltimore – for their generous support in the implementation of outbreak response activities.”
Source: L.Ikeji 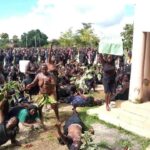 Photos: Southern Kaduna women and youths protest over incessant killings in the region

Local governments without a democratically elected council shall not be entitled to any revenue from the Federation Account. – Senate 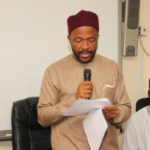 FG announces six conditions schools must abide before they can reopen.