The embattled former spokesperson of the opposition Peoples Democratic Party, Olisa Metuh, has arrived the Federal High Court in Abuja on Monday in an ambulance.

A Peoples Democratic Party (PDP) chieftain, Olisa Metuh, arrived the Federal High Court in Abuja, venue of his ongoing corruption trial on a stretcher after being taken down from an ambulance.

The former PDP spokesperson’s lawyer had, at the last adjourned date, informed the court presided Justice Okon Abang that his client was at the Nnamdi Azikiwe specialist hospital for treatment on spinal cord complications.
It was gathered that Metuh’s lawyers asked for a long adjournment after presenting the hospital’s medical report on Metuh’s health condition.

But Okon Abang refused the application for a long adjournment and threatened to allow the application made the prosecution for the revocation of Metuh’s bail if Metuh was not in court on Monday.

John Conyers III, who was endorsed his father on Tuesday to succeed him in the congress arrested for domestic violence 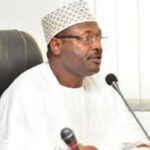