President Buhari through Shehu Garba, has expressed sadness over the death of Lt. Col. Abu
Ali, the gallant military officer killed in Boko Haram ambush in Mallam
Fatori, Borno state last Friday.
In a statement released his Senior
Special Assistant on Media and Publicity, Shehu Garba, President Buhari
said he was rudely shocked the news of the officer’s death along with
other gallant soldiers during an encounter with the Boko Haram members
in Borno State.
According to President Buhari:

“A courageous commander does not only give orders, but also joins his
men to fight the battle, no matter the risks or the obvious danger.”

President Buhari in his passionate condolence to the families of the
victims and the Nigerian Army, noted that their heroic sacrifices were
“so immeasurable that no words can do justice to their patriotism and
remarkable courage. President Buhari, who personally called late Colonel
Ali’s father, Brigadier-Gen. Abu Ali (Ryder) to console the family,
reassured them that the death of Col Ali and others in battle would
never go in vain.

“He was a gallant soldier, never to be forgotten. He has brought a good name to the family,” said the President.

He then  called on members of the armed forces not to let the tragic
incident to dampen their morale and spirit, adding that under no
circumstances should the Boko Haram terrorists be allowed to destroy the
will of our troops.

Meanwhile, the President has appointed a high powered delegation to be
led the Chief of Staff, Abba Kyari, that includes the Minister of
Federal Capital Territory, Mohammed Bello and the Minister of State
Solid Minerals Development, Baba Buhari to represent him at the funeral
of Colonel Abu Ali and others today,  Monday November 7th.
Source: L. Ikeji 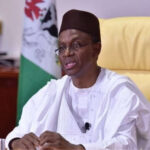 #2023elections : APC presidential candidate is expected to come from the South – El-Rufai