News going round today is that Emzor has resumed production after food and drug regulator NAFDAC lifted its seal off the pharmaceutical firm’s premises.
Speaking with newsmen in Lagos at Emzor’s head office, the chief executive officer (CEO) of Emzor, Mrs Stella Okoli said although the pharmaceutical company which has been in existence for over 30 years lost a lot of money during the closure, it will continue to produce drugs with the highest standards without cutting corners.
The company’s Executive Director, Ukeoma Ezeoke stated that the seal, which the National Agency for Food Drugs Administration and Control (NAFDAC) investigation and enforcement unit enforced on the liquid manufacturing plant of the company on May 7, has been lifted and the rights to manufacture has been reinstated. In her remarks on codeine cough syrup, the CEO reassured the public of efforts to recall the product while adding that both NAFDAC and the security agents are working tirelessly to arrest and prosecute the ‘Emzor’ man in the BBC Africa documentary as all information that could lead to his arrest has been provided for further investigations.
Okoli further said, “I am deeply saddened the problem of drug abuse and its damaging effect on our children and youths. Even more painful is the fact that a genuine therapeutic product, made for the relief of a specific illness, has been turned into a substance of abuse. From the limited depiction of rehabilitation efforts represented in the BBC programme, there is room for much support and improvement in the treatment and rehabilitation of persons affected addiction.”
Source: Daily Trust
Tagged: News 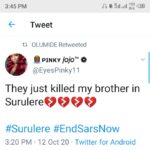 #EndSARS: They just killed my brother. A Twitter user cry out as she looses brother to SARS brutality.

We will deploy satellite to remote areas where 3G and 4G networks are not available, to monitor the 2019 general elections.- INEC

Music to anticipate: My Source Noella…. watch for it here

2 thoughts on “Music to anticipate: My Source Noella…. watch for it here”