The governor, who personally filed the suit on Friday, is seeking compensation for the injury he suffered as a result of “the malicious statements” Senator Sani.

The lawmaker called the governor an embarrassment to President Muhammadu Buhari among others.

El-Rufai is also seeking a declaration that the derogatory remarks made against him Senator Sani are totally false and injurious to his person in the eyes of the public. 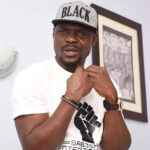