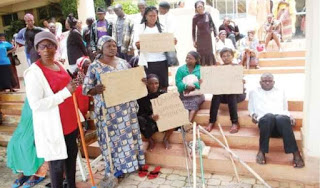 The NLC National President, Mr. Ayuba Wabba, has warned that the workers’ union will embark on a three-day nationwide strike if the Federal Government fails to agree to the demands of the Academic Staff Union of Universities after the ongoing two-day warning protest organised bythe NLC.

Wabba issued the warning during an interview with Channels TV ‘Sunrise Daily.’

He also stated that the workers’ union embarked on a two-day protest against the ongoing ASUU strike not just as a show of solidarity, but because the strike directly affected the NLC.

He said, “The two-day warning strike is to call for attention for the issues to be resolved promptly. The next level is a three-day national warning strike if nothing has happened after the protest, to show our grievances.

“We are not on a solidarity action, we are affected directly.”

Recall before the protest, the Minister for Information Lai Mohammed claimed that the protest was illegal and would create anarchy in the country.

The Minister for Labour and Employment, Chris Ngige, also taunted the workers’ union, claiming erroneously that the protest was against international labour practices.

The Nigeria Police Force had also in its bid to defend the regime, demanded that the NLC should get a permit from the Force before embarking on the two-day warning-protest.

Responding to the claims bythe authorities, Wabba said the court of law had pronounced that citizens did not need permission from the police or any authority to carry out protests.

He said, “Even the court has pronounced that you don’t require any permission. It is legal and within your fundamental human rights to protest issues.

“When people say it’s illegal, I think people should remember that no condition is permanent. We have had some of our current politicians join the NLC to press for similar actions in the past.”

See what Emir of Kano said some years back

For your interior and exterior decoration, Mc Rawlings Divine Concept is here…