In the past few days, there has been some fake news going round the internet that in this 2019 general election that the index finger(pointing finger) is the only appropriate finger for election and not the thumb.
INEC has come out publicly to say that such news is not from the commission and has not officially released any statement regarding what finger is approproriate or which is not for election . INEC said such news is fake and should be disregarded. The commision said all fingers were duely captured during registration and as such, all fingers can be used to vote and not just the index finger only. INEC advised that voters should make sure that their mark on the ballot paper is maintained in just a box of their choice of political party and should not let it stray to another box.

On the other hand its important to note that the essence of some political parties educating their loyalists and voters to use the index finger is because there are many more candidates on the ballot this year and so the space for you to place your fingerprint has reduced. That is why voters are “advised” to vote with their index finger, rather than their thumb. The ink might spill into another space if you use your thumb and that will invalidate your vote but not that using your thumb is completely wrong. Its pertinent to state that this information is not official from INEC.

Boko Haram: I am tired of this calamity; it is better I die and go to rest in paradise.” – Shekau 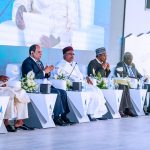