“The FIFA administration is at your disposal through the following Administration Officer, who will be in contact with you regarding the upcoming meetings and any further aspects relating to your office as member of this committee: Colin Smith, Chief Competitions Officer.

“We wish you great success and enjoyment in this role at FIFA and look forward to welcoming you soon to Zurich.”

The Organising Committee for FIFA Competitions is headed Aleksander Ceferin, President of the Union of European Football Associations (UEFA). The tenure of members is for 2017-2021. In line with the new FIFA reforms, each proposed member of any of the committees was made to go through a comprehensive integrity check conducted several organisations of global relevance and stature.Pinnick’s appointment, and in particular the thorough and painstaking checks that he passed with full marks, is a big thumbs –up for Nigerian Football, and puts out the light on the unsavoury innuendoes and deliberate mischief of a few individuals intent on putting the country’s game under a cloud.As a member of the CAF Organising Committee for the Africa Cup of Nations, Pinnick is presently at the 31st Africa Cup finals ongoing in Gabon, and will be match commissioner for Saturday’s potentially –explosive West African derbetween Mali and Ghana.The new member of the Organising Committee for FIFA Competitions, who swivelled through the ranks of football administration (from board member to second vice chairman, first vice chairman and chairman of Delta State Football Association, to Executive Chairman of Delta State Sports Commission before his election as President of Nigeria Football Federation in September 2014), is also a candidate for election into the Executive Committee of Confederation of African Football.The CAF elections will take place at the 39th Ordinary General Assembly of the organization in Addis Ababa, Ethiopia on 16th March.
Source: L.I 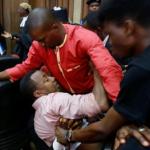 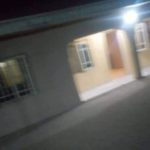 Dethroned Emir, Sanusi to settle in a remote town in Nasarawa state after been whisked an helicopter.