54 Nigerian senators have been accused of stealing National Assembly funds in the 8th Assembly under the leadership of Senator David Mark.
A facebook user Ayo Ojeniyi Posted this report on his Facebook wall with source from The Nation newspaper Yusuf Alli.

A curious payment of N2, 922, 236.310 to 54 Senators during the tenure of Chief David Mark as Senate President is now engaging the attention of the Economic and Financial Crimes Commission (EFCC).

It is one of the issues Senator Mark is expected to throw light on during his ongoing interactive session with the agency, The Nation learned authoritatively yesterday.

Five of the 54 Senators that benefitted from the N2.9billion largesse are still members of the Green chambers of the National Assembly.

Among them is a principal officer of the Senate.

While investigators suspect that the money may have been sourced from the accounts of the National Assembly, citizen Ifeanyichukwu Obazi-Nweze, in a petition, claimed that it was trapped cash of the Peoples Democratic Party (PDP).

The discovery of the cash disbursement EFCC is believed to have sparked the latest move some Senators to block the re-nomination of Mr. Ibrahim Magu for confirmation as substantive Chairman of EFCC.

The lawmakers are said to have drawn the battle line with him.

Sources said yesterday that they planned to send a 15-man secret delegation to Buhari to protest against Magu and demand his removal.

Investigation The Nation showed that  the ex-Senate President and some of the beneficiaries of the largesse will have to explain who authorized  UBA to  raise five manager cheques in favour of the defunct Bank PHB and GTB.

A document, obtained our correspondent, reads in part: “The above manager cheque number 03816905 with a value of N2,275,454,500 was deposited into the accounts of 50 Senators as beneficiaries.

A highly placed source said: “From what detectives have done, we are investigating alleged conspiracy, abuse of office and misappropriation of public funds of N2, 922, 236, 310 when Sen. David Mark was the President of the Senate.”

The source said EFCC commenced its investigation into the matter in 2015 following petitions National Assembly workers and one Ifeanyichukwu Obazi-Nweze of Abogu Financial Company Limited who claimed that the money was trapped cash of the Peoples Democratic Party (PDP).

“The probe is not targeted at David Mark or the Senate or the nation’s 109 Senators,” the source said.

“Yet, no anti-graft agency will gloss over N2.9billion shared 54 Senators in one day.

“It is a case which preceded the eighth Senate but as we probe on a daily basis, we dig up more facts on how funds were siphoned from the coffers of the National Assembly into private accounts.

“Contrary to the claim that the cash amounted to trapped funds of PDP, our team succeeded in tracing the source of the money to the account of the Senate and how it was deposited or transferred to the accounts of the affected Senators.

“We are looking at the motives behind the illegal withdrawal of the money and depositing of same to the accounts of the 54 Senators. We are also interested in the recovery of the public funds.”

Detectives are expected to recover and analyze all vouchers and other relevant documents from the National Assembly with a view to ascertaining the purpose of raising the five manager cheques and uncover any likely conspiracy and diversion of the funds.

“The investigating team has also been directed to invite the officials of the Finance Department of the National Assembly and signatories to the accounts to shed light on the purpose for which the Manager Cheques were raised to determine their roles in the transactions.”

Responding to a question, the source added: “The EFCC has not received the required cooperation from the staff of the National Assembly, especially members of the management.

“But we will explore ways of collaborating with these management staff to get to the roots of this fraud.”

On the link between the N2.9billion and the Peoples Democratic Party (PDP), the source said: “We have not established that it was a trapped cash of the opposition party. Rather, the cash in question came from one of the accounts of the National Assembly.

It was gathered that some of the affected Senators had launched desperate moves to halt the investigation.

A reliable source said: “Some of the 54 Senators have drawn the battle line with the acting Chairman of EFCC, Mr. Ibrahim Magu and have vowed to unseat him. They know they collected illegal money and may have to refund same.

“Already, they have raised a 15-man team to have audience with President Muhammadu Buhari on why Magu must be removed for looking into N2.9billion fraud. They are afraid of their shadows because the ongoing investigation is leading to more stunning discoveries.

“They believe they can only have their way if Magu is eased out of EFCC.”
Source: The Nation 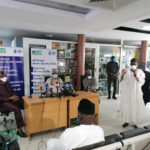 Passengers to now get to the airport 3 hours before departure says Minsiter of Aviation, Hadi Sirika as airports are 90% ready for reopening