2 Samuel 23:8,16  These be the names of the mighty men whom David had: The Tachmonite that sat in the seat, chief among the captains; the same was Adino the Eznite: he lift up his spear against eight hundred, whom he slew at one time.
And the three mighty men brake through the host of the Philistines, and drew water out of the well of Bethlehem, that was the gate, and took it, and brought it to David: nevertheless he would not drink thereof, but poured it out unto the LORD.

Every leader prays that he will be surrounded men of quality who can see a future although the way ahead seems restricted.
They can see new depths, lengths and expanse in things that appear to be simply straight forward to others. As a leader in sphere of life your capacity of greatness can awake the giant in the life of your followers.
Whenever David’s name is mentioned, you think of Generational world record contest that is recorded on the sands of time with the Philistine gaint named Goliath, but until you go through the Bible again to discover that there were other record breaking battles That happened with David’s men.  David’s followers were men who did not put their head into the sands or the cloud, but lifed their eyes to heaven, and defeated the hidden strategies for physical victory.
A good leader is surrounded people who are glad to carry out his wishes. If you are a leader,  look into the eyes of those who follow you. Are those people gleaming with eagerness or do they radiate resentment and bitterness.
Many mighty men surrounded King David. No doubts several of them might have laid down their lives for him if there was a need. What made David’s men so ready to give up their lives so that he could have a drink of water?
what can you do to make people who are following you. Generally willing to obey and to flow with you? Transform the people who follow you into eminent, distinguished, celetatedand impressive men.  Jesus transformed His followers into Apostles that we know them to be. He promised them mansions in Heaven as well as many other rewards. No wonder they died for Him.  It is not enough to have men standing with you; you require them to go with you, because a man with a friend is is as strong as thousand, and a man with two friends can chase ten thousand.

PRAYER: O Lord  awaken the hidden qualities in me as I follow you so I can lead others to follow.

PROPHETIC DECLARATION: Today I decree that the hidden quality of leadership that has been dormant in you for the revolitonal impact to your generation awakes today in Jesus Name.

INTERCESSORY PSALM OF THE DAY: PSALMS 18:34

WORD FOR THE DAY: when you serve your gift to the world. You become significant to humanity and and people will describe you as great. 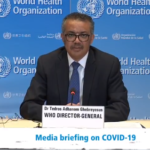 COVID-19: Lifting restrictions too quickly could lead to a deadly resurgence- WHO warns

I AM BEST MAGAZINE: The Help of God Auza Moses

”Democracy in Nigeria is dead” – FFK says as he reacts to the planned arraignment of Chief Justice of Nigeria, Walter Onnoghen