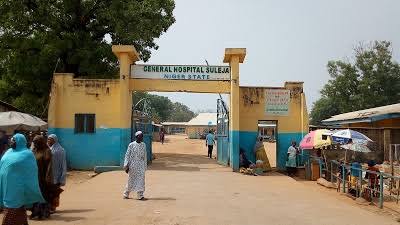 General Hospital Suleja in Niger state has been in darkness for 5 days and also has been experiencing water scarcity for same 5 days.
As at the time of compiling this report, the hospital has been disconnected completely from electricity and water supply.

While interacting with some staff and patients, IAMBESTNETWORKS confirmed that the entire hospital has been in total darkness since Friday 7th January till today Wednesday 12th January making it 5 days. Report has it that the management of Suleja General Hospital in Niger state has refused to pay Light bill and thus, the horrible situation.

As at the time of compiling this report, the MD of the hospital wasn’t on seat. When asked how they have been managing, both staff and patients said the hospital has been running on generator. Some staff said the different generators positioned in different places inside the hospital are not able to serve the entire hospital.

Report has it that the water board too on same day had their light disconnected and thus no water supply and that has been the cause why General Hospital has been experiencing water scarcity. According to genuine sources, the officials of AEDC came from Abuja and disconnected the light from water board in Suleja too because they have not been paying their light bill just as General Hospital Suleja.