General Tukur Buratai Chief of Army Staff has been accused lots of times of corruption and that he is been protected President Buhari.
But Abdulkareem who is a journalist and has been working with Buratai, has come out to disclose truths about him.

AbdulKareem said he is not trying to defend the Chief of Army Staff but what he knows about him is that Buratai is a brave and a responsible officer. He has taken even the least soldier as his brother. He has revealed that even when he visited the soldiers in the battle field, the soldiers felt motivated and encourage. He revealed that Buratai  has no cockroach in his cupboard to hide. 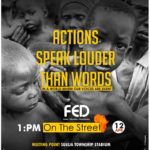