Daily trust has reported that The Federal High Court in Yenagoa, on Monday adjourned Ese Oruru’s alleged abduction till Dec. 8, 2016.
Yunusa
Dahiru, the accused was arraigned on March 8, for criminal abduction,
illicit sex, sexual exploitation and unlawful carnal knowledge of a
minor.
His Counsel, Mr Kayode Olaosebikan, told newsmen that no reason was giving why the the court did not sit.
Ese’s evidence was obtained under closed door.
The
father of Ese Oruru, Mr Charles Oruru, expressed sadness over his
daughter’s stay at the police officers mess with the new born baby.
Oruru said that Ese is suppose to be in school.
He thanked Bayelsa government for their support since the inception of the case.
“My daughter has been crying to go back to school as her classmates are now ahead of her.
“She
has lost a whole year to this saga and she is still in Police
protective custody while the accused is enjoying freedom on bail
“I am begging the Delta government, Nigeria and the world at large to come to our aid.
“These
days without education one is going to nowhere, so she is not doing
anything in their custody, while the accused moves freely and she is
suffering there.
“I have called on the Delta government to assist because I have five children which Ese is the second to the last child.
‘So, my state government should come to my family aid,” he appealed.
Else’s
mother, Rose, said her daughter was not properly taken care of as one
nursing a bawith regards to nutrition and psychological care in a
homely environment.
“People
from Bayelsa have been assisting us and even the police officers, we
want to leave there to our house because the Mess is not a good place to
stay and bring up a new born baby.
“We
are just confined to a room that we are not even allowed to go out, we
stay with our trash bin which is smelling to us and the new born baby.
“So, the world should note that we are been marginalised for no reason.
“The
boy, Yunusa, is still owing me some money for the food he ate before
taking my daughter to Kano to impregnate her for me,” she said. (NAN) 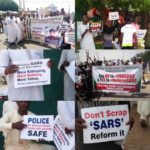