Moses who is now enjoying a new lease of life
at Stamford Bridge under Antonio Conte revealed that the former Chelsea
boss never really talked to him.
“He never spoke to me. I thought in my head, “He’s got his own players already,’” Moses told ESPN.
“I think we chatted a couple of times on the phone – he asked if I was alright at Liverpool, but that was it.”
Mourinho will be back at Stamford Bridge this
weekend where it is expected he will receive a warm welcome from many
fans and former players.
However there will be no love lost between him and
Nigeria international Moses, who was frozen out Mourinho after being
sent on loan to Liverpool in 2013, when the Portuguese returned to
Chelsea.
Mourinho was sacked Chelsea last December –
having sent Moses out on loan again at the start of last season, this
time to West Ham United – and former Italy boss Conte was appointed in
the summer.
Moses has returned to the first team since Conte’s arrival, but now plays as a wing back in the Italian’s 3-4-3 formation.
Despite the new role Moses is pleased to be playing football for Chelsea again, and speaks highly of his new boss.
He said: “The manager who is here now is giving everyone a chance – even the young lads.
“I’m pleased that he’s here and I’ve just got to go
out there and enjoy my football. As long as you work hard, the manager
will see it and he’ll give you an opportunity.
“When the new manager came in, I just wanted to see
how it went. It’s a blessing for me that he enjoys the way I play and
appreciates the effort I put in. It gives you a lot of confidence when
the manager believes in you.”
Source Daily trust
Tagged: News 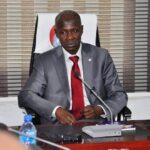