Just in the early hours of today Thuraday, Cynthia Morgan on her instagram page uploaded a photo of Hollywood actress Charlize Theron and her 5 year old adopted son from South Africa.
In the photo the 5year old kid is seen putting on a female cloth instead of male clothe and Cynthia Morgan says Charlize is trying to feminize the boy. She speaks with anger and she says this act is slavery. You remember this boy was rejected in his town in South Africa and left to die because he was accused of witchcraft… Read what Cynthia Morgan wrote on her instagram and responses from her followers 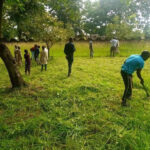 8yr old Boy Who Owns a Motorcycle Shop, & Hire People to Work for him