Togolese football star, Emmanuel Adebayor has again spoken about his
family troubles saying they made him suicidal due to their constant
demand for money from him.

Recall that in 2015, the former Arsenal and Manchester City striker
accused his family members including his mother and sister of witchcraft
and stealing from him. He also took to Facebook to offer series of
insight into his family life, where he equally lamented on how
ungrateful they were and wanted to bring him down.

After the footballer joined Real Madrid on loan from Manchester City
in 2011, Adebayor believed he could have sealed a permanent switch to
the Spanish club but later learned that his late brother sent a letter
to the club, urging them not to sign him.

Speaking in a new interview with So Foot, the 33-year-old footballer
who now plays for Turkish club ?stanbul Ba?ak?ehir said he was left
feeling suicidal ‘many times’ his manipulative family.

‘I felt like killing myself so many times. I kept this to myself for
years and years. I am disgusted that things reached this stage, but I
feel relieved to have talked about it.

‘My football career will be finished in three or four years. By
contrast my family name will remain with me – together with these
people.

‘Things are hard to bear when you are working hard to lift your
family our of poverty, but they are still opposed to you. I have always
told my younger brothers that we have been manipulated our families.

‘I often change my phone number so that my family can’t contact me.
They call me, not to ask how I am, but to demand money. That was the
case after I injured my hamstring while with Tottenham.

‘They rang me while I was having a scan to ask me if I could pay a
kid’s school fees. At least ask me first how I am before you do this!’

The former Premier League striker who made a vast fortune in excess
of £170,000 per week while at Manchester City and Tottenham presently
doesn’t speak to any of his family including his mother. 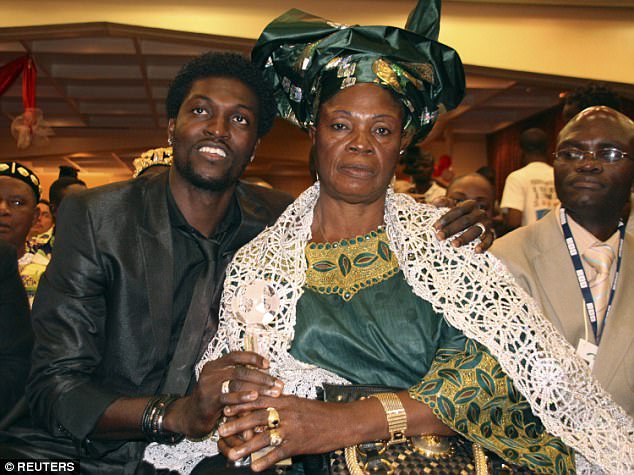