Just yesterday Saturday 28 January, Iran Foreign Ministry announced that U.S. citizens will be blocked from entering Iran in retaliation to Donald Trump’s ban on travellers from seven majority-Muslim countries coming to US.
Here is what Iran foreign affairs minister said…

‘While respecting the American people and distinguishing between them and the hostile policies of the U.S. government, Iran will implement the principle of reciprocity until the offensive U.S. limitations against Iranian nationals are lifted.
‘The restrictions against travel Muslims to America are an open affront against the Muslim world and the Iranian nation in particular and will be known as a great gift to extremists.’

This is coming after President Donald Trump on Friday signed an executive order to suspend visas for citizens of Syria, Iraq, Iran, Libya, Somalia, Sudan, Syria and Yemen.

It was a great moment for me when I presented the staff of office to the new Oba of Benin – Gov. Adams Oshiomhole 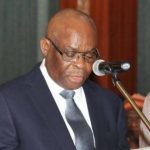