Members
of the Islamic Movement in Nigeria (IMN) were yesterday prevented the Nigerian Police from entering the National Assembly in
protest over the continued detention of their leader, Sheik Ibrahim
Zakzaky.

The protesters numbering 200 hundred called for the release of Zakzakky
at the gate of the assembly through their banners and bills.

They also criticized the Judicial
Commission of Inquiry set up the Kaduna State Government and the
actions of the Department of State Services (DSS
Tagged: News

Osun 2018: What will happen if election result is altered -Atiku warns INEC 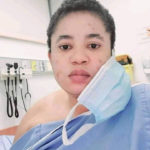 COVID-19 survivor reveals the bad effect garlic, ginger and lemon concoction had on her