Also, Shehu Garba who is Senior Special Assistant to President Buhari on Media and Publicity said the  Islamic State-allied faction of Boko
Haram that released 21 of the abducted Chibok school girls, are willing
to negotiate the release of 83 more of the girls. This is what
Reuters got from Garba from their interview

“These 21 released girls are supposed to be tale bearers to tell the
Nigerian government that this faction of Boko Haram has 83 more Chibok
girls. The faction said it is ready to negotiate if the government is
willing to sit down with them”.

Shehu has said that the Federal government is prepared to negotiate with any faction of Boko Haram.
The Islamic State-allied splinter group said the rest of the kidnapped
Chibok girls were with a faction of Boko Haram that is under the control
of figurehead Abubakar Shekau. 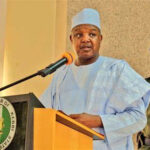