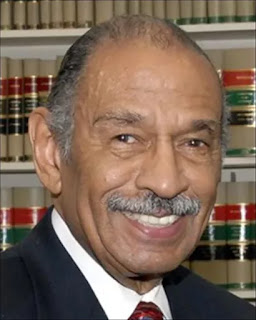 Conyers who was once referred to as an Icon Democratic minority leader, Nancy Pelosi, retired after several pressures from his colleague, including Nancy Pelosi to resign following the allegations.

The Michigan Democrat made his announcement on a Detroit radio station while at a nearhospital. He said:“I am retiring today, I want everyone to know how much I appreciate the support,” Conyers told Mildred Gaddis, a morning host on Detroit FM-radio station Praise 102.7.Conyers was accused of multiple incidents of sexual harassment from former aides which started a House Ethics Committee investigation. Late Monday night, new allegations appeared. ?????????Conyers completely denies all allegations.“Whatever they are, they are not accurate or they’re not true and I think that they, they’re something that,” he said Tuesday. “I can’t explain where they came from.”

Following his announcement, Conyers’ office sent out a one-sentence resignation letter to House Speaker Paul Ryan (Republican) and House Minority Leader Nancy Pelosi (Democrat) telling them he “had made the decision to retire” from the House “effective today.”
Due to stress-related ailments, Conyers returned to Detroit last week and was hospitalized. Conyers is the longest-serving active member of the House and a founder of the Congressional Black Caucus.????????
In his radio interview Conyers added he’d like either his son, John Conyers III or his nephew to replace him in Congress.
John Conyers III, who was endorsed his father on Tuesday to succeed him in the House, was arrested on February 15 after his girlfriend suffered knife cuts during an argument.
According to TMZ, John Conyers III said that the couple began arguing around 3 a.m. the day after Valentine’s Day. 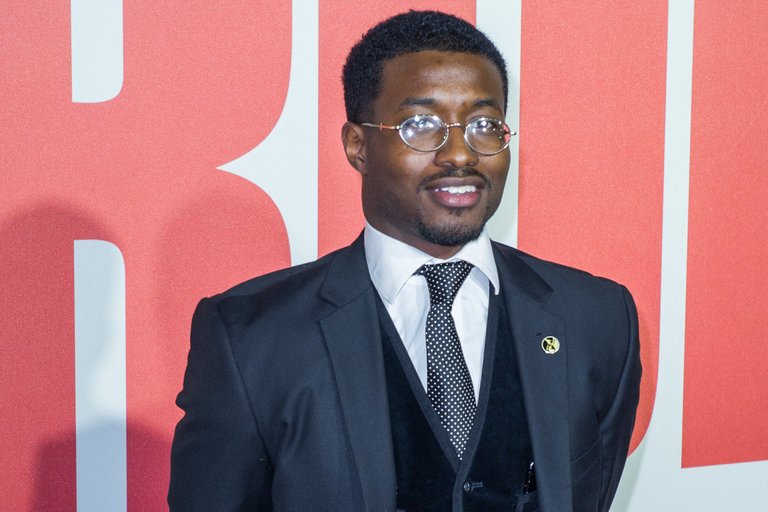 Law enforcement sources say Conyers III accused his then girlfriend of cheating after going through her computer at around 2 AM. The argument allegedly escalated into physical violence. She told cops John body slammed her on her bed and on the floor, pinned her down and spit on her. She says she tried calling the cops, but he took her phone from her.
She then claims that he chased her into her kitchen where she grabbed a 10-inch knife to protect herself, ordering him to leave the house.
She says he grabbed the knife and then swung at her twice, stabbing her, cutting her right bicep which required 3 stitches. She says he then chased her back into the bedroom, pinned her against the bed and slapped her.
They both called 911 and when cops came John claimed she pulled a knife on him and, when he grabbed it to protect himself, he accidentally stabbed her.
Cops looked at the woman’s injuries and then arrested John for felony domestic violence, while the woman was taken to the hospital.
The Los Angeles County District Attorney’s Office later dropped the charges, but the girlfriend got a restraining order against Mr. Conyers, which remains in effect until March of next year, he said.

“She says I stabbed her, which makes no sense,” Mr. Conyers, 27, said. “I didn’t do this. She and I had a verbal altercation and that escalated. She pulled the knife on me. She was chasing me. I tried to take it from her. There was a struggle. I pinned her to the wall. She kept swinging and she cut herself.”

However, despite his defence, social media users are not here for his father’s endorsement. Read some of the scathing comments below: 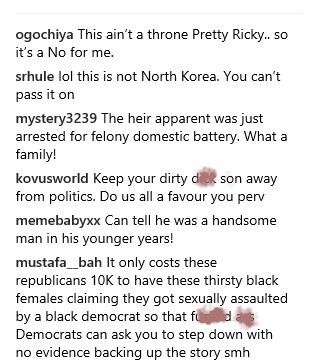 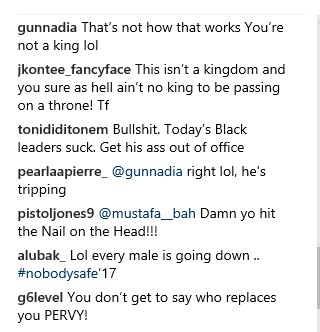 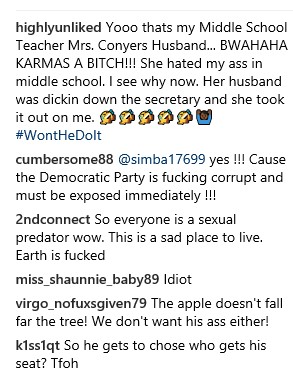 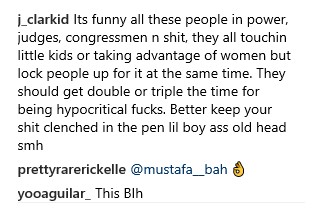