Justice Danlami Senchi of an Abuja High Court sitting in Jabi, has suspended Adams Oshiomhole as National Chairman of the All Progressives Congress, APC.

The suspension order, according to the judge, is to subsist till the final determination of the substantive suit seeking the removal of the former Edo State governor as APC national chair. The suit was brought before the court some APC members from Edo State, predicating it on Oshiomhole’s suspension the party in his ward in his home state.

In his ruling, Justice Senchi held that the party wrongfully kept Oshiomhole as the national chairman of the party despite his suspension from his ward.  The judge ordered that Mr Oshiomole should stop parading himself as the chairman of the APC.

He urged the APC to desist from acknowledging him as the chairman of the party and that the party must not to grant Oshiomhole access to the party secretariat.

Recall that Oshiomole and the state governor, Godwin Obaseki, have been at loggerheads over who is to dictate the affairs of the party in the state. The political difference between both men have led to different acts of violence in the state.

Oshiomole emerged chairman of the ruling party in June 2018.

I am Best Magazine: Trees the River(101 Quotes that will inspire you) – Paul Bamikole 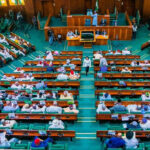