Some leaders of the All Progressives Congress (APC) in Kaduna State have opened a new secretariat of the party in the state.
The members also suspended three chieftains of the party and issued a query to the state governor, Malam Nasir El-Rufai over ‘anti-party activities.’
Danladi Wada, who describes himself as the Acting State Chairman of the APC in Kaduna said the need to relocate the state secretariat of the party to No.11 b Sambo Road, Kaduna is due to the constant harassment of party members considered as threats to the interest of a few in the party.
“The decision to relocate as approved the majority  members  of the State Executive Committee becomes necessary so as to create a harmonious workings condition,  considering  the unprecedented manner  which some politicians have permanently deployed thugs that “invaded the former address harassing and intimidating and beating  innocent officers…, “ he said.
Wada said the party decided to take disciplinary measures on some of its members after investigations in accordance with the party constitution and has found them to be deserving of some punitive measures.
Wada said in that regard the special adviser to the governor on politics and intergovernmental affairs, Malam Uba Sani has been suspended or 18 months while the acting state secretary is also suspended for 18 months and Alhaji Audu Kwaru, the state commissioner of finance is also suspended for anti-party activities for 18 months.

He said, “Governor El-Rufai has been queried and we are expecting him to answer the query within 48 hours. Failure to do that, the state working committee will sit down and deliberate. We queried Mallam Nasiru El-Rufai for his anti-party activities and anti-human activities. The letters would be delivered to these personalities today.”
He called on the leadership of the party at all levels in the state to imbibe discipline and respect for the rule of law and rights of all party members without any form of discrimination and to prepare for the March, 2018 congresses of the party.
Wada said henceforth, all members, officers and organs of the party and the general public are to forward all correspondences due to the Kaduna State APC and its officials to the Sambo Road secretariat of the party.
Senator representing Kaduna North Senatorial zone, Suleman Othman Hunkuyi who was at the briefing aligned himself with Wada’s position.
Attempts to get the reaction of Uba Sani were not successful as he was not picking his calls.
But Governor El-Rufai in a swift reaction said he will not pay heed to what he described attention-seeking gambits of desperate demystified politicians and warned that rascally actions undertaken in the hope of getting a lifeline from reconciliation moves will not be rewarded.
He said, “The government had been made aware of the boastful and pompous claims of Senator Suleiman Othman Hunkuyi, that he will change the leadership of Kaduna State in 2019 installing himself as Governor.
“The desperate Senator is seeking a lifeline, in the vain belief that ratcheting up rascally actions will bring him attention and relief from the mooted national reconciliation efforts. Senator Hunkuyi has further illegally created a faction, headquartered in his house, as a bargaining chip.
“This Senator has failed to understand that you cannot create party executives at your whim. It is the party’s prerogative to consider appropriate responses to this breach of discipline. But as a government, we view these actions as the needless drama of political traders.
“Hunkuyi has on three previous elections failed to get himself elected as governor. Yet he flaunts false claims that it was him that got Malam Nasir El-Rufai elected in 2015.
“In 2015, it was God Almighty and the good people of Kaduna State that made Malam El-Rufai Governor and Hunkuyi a Senator. It appears that Hunkuyi has forgotten how his previous attempts to be Governor in 2003, 2007 and 2011 failed miserably. With the Almighty’s gracious help, his association with the El-Rufai brand helped get him elected as senator in 2015.
“It is clear that he can’t be cured of his obsession to be governor of Kaduna State at all cost, whether through betrayal of trust, treachery, or deceit. But should know now that Kaduna State is not for sale. Ordinary people, including in Hunkuyi’s Kudan local government area, now know that governance can work for them. The era of political traders is over.”
Tagged: News 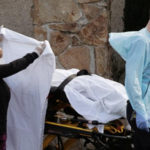 Deji Adeyanju reportedly remanded in Keffi prison after his rearraignment