A popular blogger Linda Ikeja has reported that, “The Federal Ministry of Education says contrary to online media reports,
it spent N6m in building a block of eight VIP toilets in Unity schools
in riverine areas in the country and not N50m that has been reported.

A statement released the Deputy Director, Press in the Ministry, Ben
Bem Goong, states that another N40 million was budgeted for the
construction of six toilets in Unity schools in upland areas.

According to Goong, VIP toilet means pit toilet with
improved ventilation, incorporating features to enhance sanitation and
health, and not luxury toilets.

According to the statement, the N50m and N40m quoted as costs in a
recent report was for three projects depending on location which
included

“VIP toilets and bathrooms in hostels and classroom areas, provision of
modern kitchen and renovation of dining halls and borehole and
reticulation of water.” He added that the construction project is meant
for all 104 Unity schools across the country.” 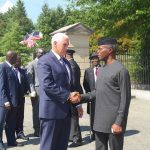 Ebonyi State ordered the release of N500,000 to the Mr Chijoke Oraku who was brutalized soldiers